What is BLJ Bangradesh Corporation Ltd.?

The establishment of the leather factory in Bangladesh was decided. We had received our first OEM order; it was 3000 pcs of Leather Pen Case from Staedtler Japan, we had produced & did our first Shipment on January-2014.

We had started to produce customize leather goods for "JOGGO ～Custom for Gift～" -a customized gift item of leather goods Brand for customers of Japan.

Estimated production had reached to 10,000 pcs. 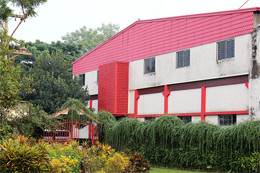 To meet the growing demand of our leather goods from customers, we've relocated our factory & business to a new place which is 10 times bigger than the previous factory, due to expand our production capacity. Number of employee reached to more than 100

Number of employee reached to more than 200. Number of employee reached to more than 300

Cumulative production was reached to more than 200,000 pcs Apparel factory “CORVA” was set up and started production We've opened our "Child Care" unit to take care of children of our members; who are being working in our leather goods manufacturing factory.

We have started our fourth project in Bangladesh" BLJ Career Academy " -an ideal institute where we are building unskilled educated Bangladeshi graduates to be capable, skilled and job oriented to engage in executive level jobs in apparel industries of Bangladesh .
September-2019

We launched our fifth project in Bangladesh" BLJ Bangladesh Corporation Ltd-(Shoe unit) " -to create employments & a better working environment for the deaf people of Bangladesh .

To Make the Bangladesh Factory the Leading Factory of the World!

We employ the vulnerable people who are working away from home, single mothers, and others in a difficult situation to our leather factory in Bangladesh. Knowing that most of them have no past experience related to leather production which makes it quite difficult for them to find a job in other factories. Even if they get to find a job, their salary will be probably lower than the minimum average. At our factory we train them from the zero base. It indeed costs a lot of money, efforts and time. However, the result is that they become professional workers who make products with high quality.

Our staff has become “Professional Craftsmen” who are able to produce items with high level of Technics. They make products with high quality and reasonable prices. Hereafter, we are studying the possibility to establish residential facilities for workers who come from far villages as well as kindergartens for their children. Not only making job opportunities, but also we aim towards making a great and honorable working environment which would be a worldwide role model where everyone would want to work for indeed. Where Did the Idea Come From?

The Work Place with Honor and Pride

Bangladesh is 4 times narrower than Japan and holds the population of 160 million, which is regarded as the poorest country in Asia. Work conditions are very bad, and labour wages are often unreasonably low despite the long working hours. Furthermore, we often witness the cases where workers do not get paid their salaries or the accidents caused by the bad condition of aging buildings. Farouk Hussain, the representative of Bangladesh had the intention to solve the poverty problem in Bangladesh, and joined Borderless Japan Corporation. After examining many business plans, Faruk finally decided to establish this factory in order to create employment for the vulnerable and create the environment where people can work with joy and pride.

Mixing Technics from Japan and Bangladesh

The Leather Material is Exclusively from Bangladesh

Muslims are the biggest majority in Bangladesh population. There is a traditional Islamic festival that is held once a year called Eid Al-adha. Some people call it beef sacrifice festival where Muslims around the country distribute beef to neighbors, relatives, friends as well as poor people who cannot afford the daily meals, resulting in a large amount of raw leather left behind as garbage. By using the technics of developed countries, Bangladesh has developed leather tanning procedure and became one of the biggest leather exporting countries around the world. However, although Bangladesh is professionalized in producing raw leather, it is poor at making leather products such as bags and wallets out of raw material.

And there, BLJ Bangladesh started a new challenge of blending the raw leather tanning technic in Bangladesh with the leather item producing technics in Japan. It made it possible to produce the final products with high quality, and reasonable prices for our customers. The Ideal Society the Leader Aims to Create

To create the world where your dream comes true

For those who are suffering from poverty, to survive the day is all they can think of on a daily basis. Therefore, though we ask them about their “dream” of each one of the fresh men when they enter to the factory it wasn’t easily answered. BLJ Bangladesh Corporation Ltd. hopes to create a platform where the employees do not only get stable salaries but also can draw their own dreams, and even work hard to achieve them. The platform will support the passionate fellows who want to solve Bangladesh social problems by their own hands. We believe that the situation of Bangladesh will even change greater when these social entrepreneurs begin to make efforts towards its success.